Much of my thinking on this comes from a blog from 2017. 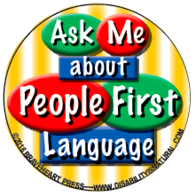 Language is a tool. We can use it to build people up or tear them down. Take the simple word quite.

A British man shows an American friend a picture of his girlfriend.

“She’s quite pretty,” says the American.

The British man is distraught and the American is confused by this reaction.

American usage of quite means very or extremely. He was saying that the girlfriend was beautiful, but that is not what was heard, as a qualifier in the UK, quite usually means fairly or moderately. The British man heard the American say, “She’s fairly pretty,” which is a long way from what was intended. Another example of two nations divided by a common language.

Person first language is like this. Since the 1980s the idea that you should not refer to a disabled person, but to a person with disabilities has come in. All well and good. Or is it? Look at this from the Radical Copyeditor blog linked above:

PERSON A: I’m autistic and blind.

PERSON B: No, you’re a person with Autism Spectrum Disorder and blindness.

The problem I have with the above example is that Person A is already using person-first language. They say. “I’m autistic and blind,” which is already implicitly person-first. I’m comes first before the conditions. It does not need the word person to be there to be person-first.

Take my position. The phase I use most often is, “I have autism.” But if you wanted to refer to me as either a person with autism or an autistic person I would choose the latter. Autism explains what I am, who I am. My brain is wired in a particular non-typical way and that is who I am, I cannot change this because it cannot be changed. Autism defines me it is entwined in everything I am. Please respect me.

Conversely, my arthritis and diabetes do not define me in the way autism does. I am person-first on these.

But respect goes both ways. There is a word I see being used on Twitter by autistic people and people with autism, (some of us prefer the other way round) to describe people without autism, which is Allistic. I hate that word, I find it disrespectful. I have never heard anyone without autism say they want to be called allistic. If I want to be respected for who I am the last thing I should do is disrespect others.