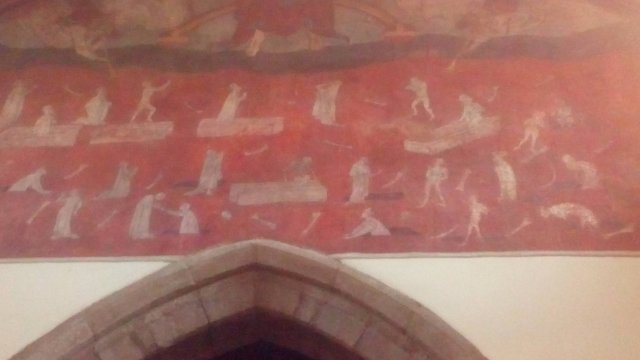 We were away this weekend. My brother was 60 years old on Friday and was having a double birthday celebration as his wife will also be turning 60 in 2020. We stayed in the Greyhound Inn, an 18th-century coaching inn in Lutterworth, then on Sunday morning to the church, dating from 1385 We arriving feeling tired from celebrating on Saturday night into the small hours.

Inside the church, above the central arch, is a mural depicting the return of Jesu, when those who have died will rise to meet him in the air. The bottom half of the mural is macabre, showing some people rising without limbs and individual bones lying around. One of these bones had a shape like male genitalia, which from what I have seen elsewhere of medieval church art is likely to be deliberate.

The worship was led bt a depletes worship band, a keyboard and soprano saxophone, and six singers. The music was towards the traditional side of things, being within the Christmas period it contained well-known carols. The service was led by two lay readers, the Rector taking a well-earned rest. By coincidence, our Vicar, back in Huddersfield, was taking a post-Christmas day off too.

The sermon theme was  Contrasts and Change. The preacher spoke of a Christmas Day service she took in a prison. A record number of prisoners attended, but she was sad that after the service the tree had to be immediately taken down. Things left unattended in prisons have a habit of disappearing.

It was based on the second part of wise men story. Mary and Joseph had to flee to Egypt to escape the despot, Herod.  Why didn’t God let it all go smoothly? Even though Bethlehem was a small village and only about 20 children would have been killed, every death is a tragedy. What about all the children who died in the Holocaust? This is what happens when people do not follow God.

Matthew’s Gospel was written for a Jewish audience and contains parallels in this story to stories in the Old Testament.

All these show God working through bad circumstances. God can also work for your good when a disaster strikes if you let him..