Is God calling you to go?

The ambassadors of Jesus

These twelve Jesus sent out, instructing them, “Go nowhere among the Gentiles and enter no town of the Samaritans, but go rather to the lost sheep of the house of Israel. And proclaim as you go, saying, ‘The kingdom of heaven is at hand.’ Heal the sick, raise the dead, cleanse lepers, cast out demons. You received without paying; give without pay. Acquire no gold nor silver nor copper for your belts, no bag for your journey, nor two tunics nor sandals nor a staff, for the labourer deserves his food. And whatever town or village you enter, find out who is worthy in it and stay there until you depart. As you enter the house, greet it. And if the house is worthy, let your peace come upon it, but if it is not worthy, let your peace return to you. And if anyone will not receive you or listen to your words, shake off the dust from your feet when you leave that house or town. Truly, I say to you, it will be more bearable on the day of judgement for the land of Sodom and Gomorrah than for that town.
Matthew 10:5-15 ESVUK 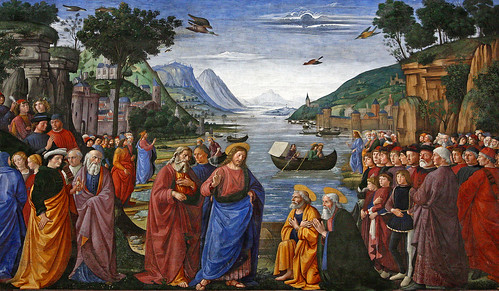 “Heal the sick, raise the dead, cleanse lepers, cast out demons,” said Jesus. Which is odd, because the problem, mentioned in Chapter 9, is for a lack of people to go out: “The fields are white for harvest, but the labourers are few.” It does not make any sense to a compartmentalised mind that healing the sick, raising the dead, cleansing lepers and casting out demons should be given as a job description to people who were preachers.

I attend a church where people’s stories of what God is doing is important. People talk briefly, or are interviewed about what is happening and sometimes they talk about how God has healed them, some of them say it is through a ministry of prayer which is available every Sunday. Preaching God’s word and healing belong together, it is all about God’s kingdom on earth.

Why did Jesus send his disciples only to the Jews? They had followed Jesus and heard him preach and seen him heal, including the servant of a Roman centurion. Jesus had performed a healing for a non-Jew, why were they sent to the Jews alone?

In the last blog, I said that the twelve disciples were chosen because there were twelve tribes of Israel. Jesus was setting up a new people, not simply a renewal of the Jewish nation, Jesus’ kingdom was one that can only be entered through him alone and was open to all people from all walks of society. Jesus’ disciples were not drawn from the theologically educated Pharisees or aristocratic Sadducees but were ordinary people such as fishermen.

Jesus’ last instruction to his disciples, before he was ascended, was to wait, adding, “But you will receive power when the Holy Spirit has come upon you, and you will be my witnesses in Jerusalem and in all Judea and Samaria, and to the end of the earth.” Acts 1:8.

Start where you are

Jesus sent the twelve to the Jews, Jesus told his disciples to preach to all after the Holy Spirit had come but to start where they were. The same principle applies now, people called to missionary work abroad and also who wish to become ministers in the church are chosen from those who God has called and who have shown that they are faithful to God in their home setting.

Jesus came to bring God’s kingdom to earth, but that did not mean that the old people, the Jews are forgotten. Jesus was Jewish and the disciples were Jewish so he sent them out to the Jews first, ministry starts where you are.

Please pray to God and ask him what he is calling you to do where you are.