The conflicts of Jesus

46 While he was still speaking to the people, behold, his mother and his brothers stood outside, asking to speak to him.* 48 But he replied to the man who told him, “Who is my mother, and who are my brothers?” 49 And stretching out his hand towards his disciples, he said, “Here are my mother and my brothers! 50 For whoever does the will of my Father in heaven is my brother and sister and mother.”
Matthew 12:46–50 ESVUK 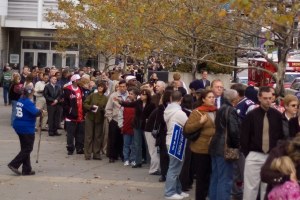 The relationship between the passages

The two passages do not seem to be related other than being things that happened one after one another. But Matthew was methodical and deliberate in writing his gospel, nothing is next to another by accident. If you read Luke’s Gospel the story of the return of evil spirits is in chapter 11 while the event with Jesus’ family waiting outside is in chapter 8, these were not consecutive events. Matthews Gospel is a teaching gospel and events are placed together to illustrate a point. The source of the former event is from Q, a collection of Jesus’ teaching used by both Matthew and Luke whilst the latter is in Mark.

In the story from Tuesday the evil spirits get back in because there is a void left, humans are made in God’s likeness and there is a God-shaped hole inside each and every one of us that can only be filled by God. If it is not filled by God, who knows what will be shoehorned in there. The author G K Chesterton said:

“When men choose not to believe in God, they do not thereafter believe in nothing, they then become capable of believing in anything.”

In order to fill that void, Jesus offers himself as we will see …

Criticism of his family?

Is Jesus being really rude here? His mother and brothers were outside, and it looks like Jesus is saying that his followers not his biological family are his real family. Nothing could be further from the truth. Jesus never relegates the biological family in favour of the spiritual family, it does not say whether Jesus after saying this went to talk with them, to invent a scenario where Jesus ignores them is doing the text a disservice. Jesus is enlarging his family. You can be like them, you can be one of them. Jesus does more than fill the God-shaped hole, Jesus wants a close relationship with his followers. By following Jesus you can have a relationship with Jesus every bit as real as a relationship with a close biological family member.

Jesus invites you and me to be a disciple as a member of his family. Are you ready to take the risk and say, Jesus, come and fill my life?

* The eagle-eyed among you will have noticed that verse 47 is missing: “Someone told him, “Your mother and your brothers are standing outside, asking to speak to you.'” This is because these words do not appear in the oldest manuscripts of Matthew’s Gospel.