7 words from the cross

After this, Jesus, knowing that all was now finished, said (to fulfil the Scripture), “I thirst.” A jar full of sour wine stood there, so they put a sponge full of the sour wine on a hyssop branch and held it to his mouth. When Jesus had received the sour wine, he said, “It is finished”, and he bowed his head and gave up his spirit. John 19:28-30

It is finished could be a cry of despair or of victory. To look at which, we have to look at the writers have approached the crucifixion. Like good journalists, the Gospel writers have their angle on the news: The synoptic Gospel writers have focussed on the horror of the day. The agony in the garden, the arrest, the apostles running away, the trial in front of the Sanhedrin, the torture, the darkness over the land and Jesus dying alone have all been described in some detail.

John has a different angle on the events. Jesus is portrayed as King, in charge of and orchestrating events. It is finished is a cry of victory.

But what is finished? 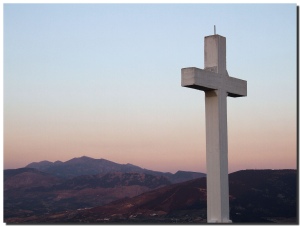 The sacrifice for sin

There were thousands and thousands of animal sacrifices. Every family had to sacrifice a lamb at Passover, and that was just at passover. Now the sacrifice of Jesus is effective for all people at all time. Hebrews 10:4 says, “For it is impossible for the blood of bulls and goats to take away sins.” but the blood of Jesus has achieved this

The prophesies are complete

All of the prophesies concerning the death of Jesus concerning salvation and redemption are fulfilled. This gives us the confidence to know that the prophecies about Jesus coming again will also be fully fulfilled.

Satan, Lucifer, the devil has been waring a war agaist God and against man since the beginning. He tried to have Jesus killed at birth and early in his ministry, he tried to distract jesus from his ministry. And now his attempt to defeat Jesus has been turned around. The power of Satan to torment men has been overcome by the power of God working through the vilnerability of Jesus.

The law is fulfilled

Jesus said that he came not to do away with the law but to fulfil it. Now Jesus can claim that this is finished, the law has been fulfilled. The law as given to Moses has not gone, but there is a new law, a law of grace, a law of love.

The salvation plan is finished

The plan of the salvation of humanity and the redemption of the world  made by God before the creation of the universe is now complete. We can do nothing to add to the plan, all we can do id respond to God’s love through Jesus.

The only thing left to be won. But wait: Easter is coming.

For Christ, our Passover lamb, has been sacrificed. Let us therefore celebrate the festival, 1 Corinthians 5:7-8

This is not an exhaustive list. Whenever I see any plan or theory of atonement I have the same criticism. They do not go far enough. There are no limits to the love, goodness and power.