Is it a dirty word?

I have been thinking about negative feelings that the term Evangelical has been getting in the press, the Guardian newspaper seems to have a down on us. The term seems to be synonymous with right wing political ideas coming from the USA, but this should not be so.

But the term Evangelical has a different meaning either side of the Atlantic Ocean, which is understandable. The Evangelical awakening  in Britain goes back to Whitefield and Wesley, where the American version to Jonathan Edwards.

(An aside: Even the name Jonathan Edwards means different things in different countries: The British would think of the triple  jump world champion of the 1990s.) 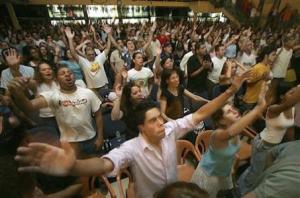 The main difference is the importance of the social part of the gospel, which is emphasised more in the UK than USA though there are exceptions, notably America’s Jim Wallis. John Stott and Billy Graham held different opinions on this, Stott emphasised the social aspects of the Gospel and Graham not. Yet they still supported each other’s ministry. My view is that the social Gospel alone is not the Gospel, but it is part of the Gospel and should be prached alongside salvation.

The point I am making is that there are a lot of different views within Evangelicalism, from politically right wing to moderately left. It includes the Fundamentalists.

The problem for the press, particularly the Guardian is their misuse of the word Funsamentalist. Fundamentalist tend to be politically right wing, and mostly adhere to a set of Christian beliefs called the Fundamentals. There can be no such thing as a Muslim fundamentalist.

Do we need another term? I do not want one, even though the term may be misunderstood. Being part of something wide and diverse gives oportunity for discussion and understanding the other’s point of view. Those ofus who like me are not right wing freedom to carry arms Fundamentalist Evangelicals need to show what being Evangelical means by doing what the early Evangelicals did. To show God’s love in action by preaching the Gospel and by reaching out to the neediest in society. That is our legacy.