Messages to the churches – Day 9

And to the angel of the church in Pergamum write: ‘The words of him who has the sharp two-edged sword.

Pergamum is located on the plains and foothills along the Caicus River in Western Turkey. It was considered a major city in Asia Minor since the 3rd century BC, and became a Greek and Roman hub for temple worship.

Be warned, Jesus is not nice. Like the God-like Lion, Aslan, of the chronicles of Narnia, you are never safe with Jesus. C S Lewis put it like this:

“Aslan is a lion- the Lion, the great Lion.” “Ooh” said Susan. “I’d thought he was a man. Is he-quite safe? I shall feel rather nervous about meeting a lion”…”Safe?” said Mr Beaver …”Who said anything about safe? ‘Course he isn’t safe. But he’s good. He’s the King, I tell you.” 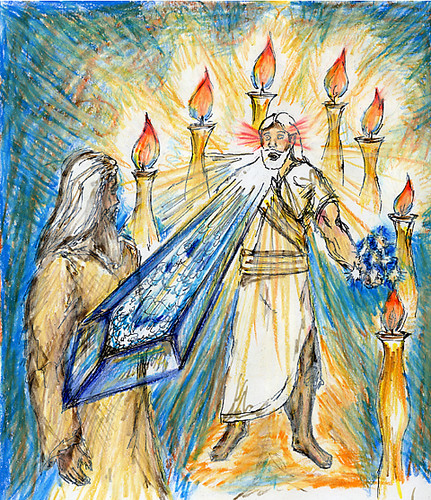 The picture of Jesus given to this church is that of Jesus with the double edged sword in his mouth from the previous chapter (1:16). Jesus is the judge, and his rulings go both ways. It is not safe to go against the will of Jesus. The gentle Jesus, meek and mild is the same Jesus that made a whip and overthrew the money changers’ tables in the temple. He can be both gentle and belligerent, wonderfully belligerent. Which side of Jesus are you on? The words of Jesus can hurt like nothing else.

And to the angel of the church in Pergamum write: ‘The words of him who has the sharp two-edged sword.

‘I know where you dwell, where Satan’s throne is. Yet you hold fast my name, and you did not deny my faith even in the days of Antipas my faithful witness, who was killed among you, where Satan dwells. But I have a few things against you: you have some there who hold the teaching of Balaam, who taught Balak to put a stumbling block before the sons of Israel, so that they might eat food sacrificed to idols and practise sexual immorality. So also you have some who hold the teaching of the Nicolaitans. Therefore repent. If not, I will come to you soon and war against them with the sword of my mouth. He who has an ear, let him hear what the Spirit says to the churches. To the one who conquers I will give some of the hidden manna, and I will give him a white stone, with a new name written on the stone that no one knows except the one who receives it.’
Revelation 2:12-17