Windows on the cross 1: Busy church 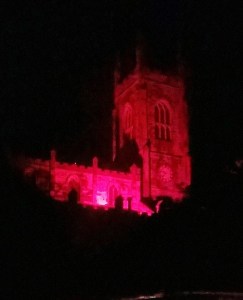 We arrived  at church later than usual, about five minutes before the service was about to start, and it took a while to get through the inner door for not the sanctuary those who were arriving at the same time as us and those who were there earlier and had stood around to chat were making their way in at the same time. The downstairs area was already full, so we made our way to the balcony, the front three rows of which were already gone. We have never sat so far back in our church.

The reason for all these people was that a couple in our congregation were having their second child, Primrose, dedicated at this service: both family and members of their previous church were there. It was not a christening, we give parents the choice. It was an all age worship service, things were more informal than usual for our 10:45 service. At times there was a bit of noise, but not too much, we have got used to children in church. I can be quiet at home.

Was there a sermon? It’s hard to say. After the Bible reading, there was a talk with children acting out the story, that of the Prodigal son, with the emphasis being put on the reaction of the older son to the return of his wasteful brother. The story would have a good ending with the return of the prodigal and being greeted by the father and given a party. The actual ending, of the older brother being invited to join the party and declining is an anti climax, and also a cliffhanger. We do not know whether the older son reacted to his father’s invitation to join the party.

The elder son was resentful that his brother was allowed to go off and squander money when he was being obedient to his father and had wasted nothing. The older son is the good guy of the story. He worked hard and was respectable. The message at the end is that respectable people still need Jesus. Working hard in order to be wealthy is its own reward. But the invitation of Jesus is to all, to the respectable like the older brother as well as the wasteful younger.

This led into a confession.

I pray that my readers, no matter what their standing in society, will respond to Jesus’ call to follow him.