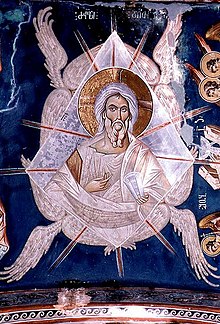 During the lent blogs I looked at the titles of Jesus used in the letters to the churches part of the book of revelation. I thought it would be good to look at how God is named in the rest of the Bible, both Old Testament and New Testament, and to what each of these names tell us about the qualities and nature of the God we worship.

There are a lot of names for God used in the Bible, the simplest form is El.

El is the simplest because it simply means God. It is used on its own, but usually in a compound form with other words to make other names for God. More of them in later blogs coming mostly on Fridays for the next few months.

El is used as the name of God, but also of other gods. The word is derived from the word for power of might, so we can say that when used for other gods it is talking about other powers. St Paul, in his letter to the Ephesians, where he speaks of:

In the Old Testament the name El, on its own not in a compound form, is found in the Psalms, it is essentially a poetic form. Here it is used in Psalm 18:32, it shows that the property of God of being mighty can be transferred to us, it is not something we achieve by ourselves, but is a gift from God alone.

the God who equipped me with strength
and made my way blameless.

But as it is a poetic form, it is better to leave with more of this song of worship, this poem of love for God and his mercy. Psalm 18:30-26

30 This God—his way is perfect;
the word of the Lord proves true;
he is a shield for all those who take refuge in him.
31 For who is God, but the Lord?
And who is a rock, except our God?—
32 the God who equipped me with strength
and made my way blameless.
33 He made my feet like the feet of a deer
and set me secure on the heights.
34 He trains my hands for war,
so that my arms can bend a bow of bronze.
35 You have given me the shield of your salvation,
and your right hand supported me,
and your gentleness made me great.
36 You gave a wide place for my steps under me,
and my feet did not slip.