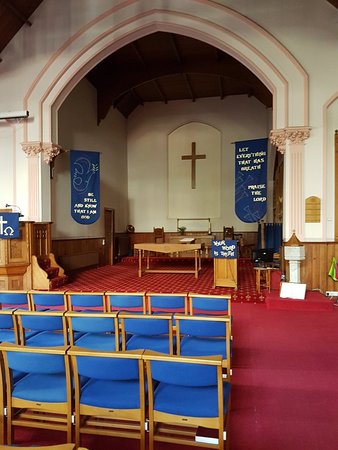 We were over in Wales for a few days, but seeing it is Llandudno, it feels more like an enclave of England by the North Welsh coast. So as it was a holiday from Huddersfield it might as well be a holiday from Anglicanism as well. On our walk around the town yesterday we noticed that the Church in Wales congregations were likely to be a little too far in the high church direction for us both to be comfortable. We ended up at a Methodist Chapel.

St David’s are a friendly congregation on the Eastern, quieter, side of Llandudno, which according to the words on the screen as we entered was actually in Craig-y-Don. We were greeted at the door and after we had found a seat, greeted again. Otherwise, we were left alone. I like quiet before the service; there was only the sound of the piano playing worship songs.

Oddly the worship area was half pews and half chairs. The wooden ceiling is impressive. We sat in a chair towards the front. These were comfortable, more so than the ones we have in Huddersfield. If I gave points for church services, which I don’t, I’d award an extra point there. After the service, the coffee tasted like instant, so the theoretical point is now deducted. Of the people serving coffee and tea, one had lived in Dewsbury, and the other had bought fish in Huddersfield Market. The fishmonger was my father. 100 miles from Kirklees and this is what we get. After the service, a few more of the congregation introduced themselves.

That was good for me. My autism can cope with people one at a time. I am less good with groups. The only autism minus point (again hypothetically as I don’t give points) was that the words on the screen for the hymns were projected onto a picture which was only a little distracting. Plain backgrounds are better for me.

The songs themselves were traditional or worship songs of the 1990s. I am pedantic about reading the publishing dates, please don’t hold it against me. They were played using the piano sound from an electric keyboard and there was also an unplayed drumkit in the building.

On to the sermon. It mentioned fast cars, the preacher had recently missed the chance to drive a Ferrari, and food, including Cafe Bach, two doors from the church where we ate yesterday evening and I gave them a 5-star review on Trip Advisor. I do give points for food. The essential I got from the sermon is that we should feast on Jesus. I also remember that if we had been here a week later we could have been to a service celebrating the launch of Scripture Union, which was launched on the beach in Llandudno 150 years ago. There is still a beach mission in Llandudno, we walked past it 3 times, they were packing up each time. My wife and I went on a beach mission when we were young and engaged to be married, and here we were still married 38 years later.

Back to the sermon: One of the illustrations was the preacher’s trip to visit a relative in Hospital and being reassured by God that all would be well and that she (the sick relative) was soon out of intensive care and home. Then there was a relapse, and the preacher went back on the long journey to the hospital to pray over his relative, asking God along the way why he had allowed this to happen. He followed instructions from his wife to stay this time until she was fully recovered. God’s promises can be relied on.

The main thing I remember though is the friendliness of the congregation. If I were in Llandudno for longer I’d worship here again. Out of ten, I’ll award it… Oops, I nearly forgot; I do not award points to churches.