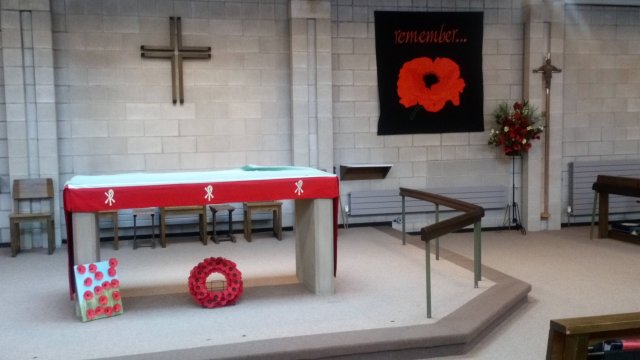 The centenary of the Armistice at the end of World War I. Today my wife were at my father’s church where he was to lay the poppy wreath later in the service. We met with him inside the church, where he was wearing his best suit and REME tie.

The service was, of course, about remembrance. There was no nationalism, this was not the time for the glories of war and victory, today was about the cost of war, we remembered the fallen in war and we also sang songs of social justice and peace. The Graham Kendrick song Beauty for Brokenness and the Celtic Hymn Be thou my Vision were among the things we sang. Then following communion, at 11 am, my father laid the wreath and in silence we remembered those who gave their lives that we might live.

They shall grow not old, as we that are left grow old:
Age shall not weary them, nor the years contemn.
At the going down of the sun and in the morning
We will remember them.

After the service and after a pub meal my wife and I walked home past Huddersfield Cemetry, there were people there visiting graves with regimental and RAF crests on the headstones, a poignant reminder of how people are still affected by war.

The thing that touched me most though was the end of the service was the tune that was played. The music was that of Make me a Channel of your Peace.

That is my prayer of today, echoing St Francis. Lord, make me a channel of your peace.