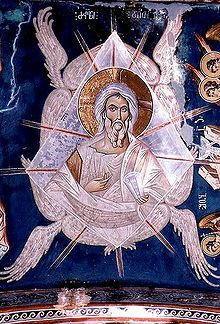 All good things, as they say, come to an end, and this series on the names of God in the Old Testament which I started at Easter 2018 now concludes with a name from the New Testament. Love.

God is love we are told in John’s first letter.

But this is not a new concept. Looking back on over 14 months of weekly posts God being love has been there all the time. God is a jealous God, but jealous on behalf of his people. God is a God of revenge, but the vengeance is on behalf of his people. God gets angry with his people, mostly because God plan for his people Israel was to spread knowledge of their God of love to the nations around and instead they became insular, keeping God for themselves.

God was never meant to be the Jews alone but for all people. Christians who try to keep God for themselves are making the same mistake as the Jews in Old Testament times. God is not just our God, he is the God of all people and loves all of us.

We are to show God’s love, as well as his kindness and goodness etc. to all. We are to show the love of God to all races, all religions, all sexualities. We are to demonstrate the love of God to the poor as well as the rich. To be told that they are as important to God as kings, queens and presidents is good news to the poor. To be told that God loves them is good news to Muslims, Hindus and atheist, it hurts God when they reject him. The love of God I’d good news to gays, lesbians and those with non-binary sexuality. Our task is to accept them. Our task is to build bridges, not walls.

When we build walls between ourselves and others we can be sure where God is: On the other side of the wall. Building walls separates us not only from others but from God. We end up walling ourselves in.

God’s love is shown in Jesus who died for the sins of the whole world. It is also in the Old Testament, celebrated by psalmists, His everlasting love is proclaimed by prophets. God’s love is shown in redemption, which theologians have written long books about, but which can be summed up in just nine words: This is God’s world, and he wants it back.

The God of the Old Testament is pure love.

All all good things do not come to an end. The love of God never ends.