We said goodbye to Curate Steve and his family. After a training period of three years, he is off to a new position. Huddersfield’s loss will be Loughborough’s gain. 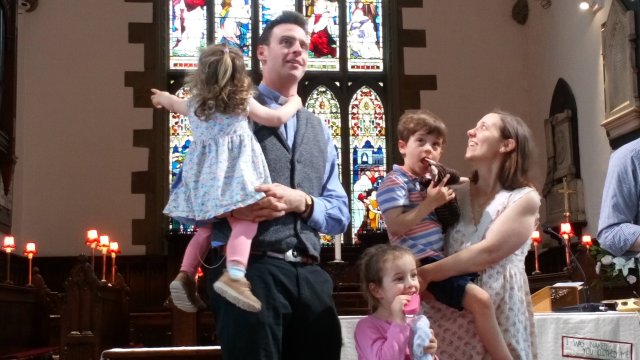 We saw them off well. The family were brought up to lead an action song before the children and young people left for their sessions, and at the end of the service, the whole family were given gifts and an envelope with a cash gift. After the srvice where was a church picnic, where Vicar Mike’s competitive streak was revealed in an all-age game of rounders.

I was in the congregation for the second service, the worship band coped well with no percussion. I found the flute parts particularly moving.

The service was the second in a series about love. This was based on the short passage from 1 Corinthians 13:4-7:

Of course, the sermon was given by the departing curate. Steve spoke about his relationship with love.

I know Love, he said, others say they know love but when asked what that is they speak od something warm and fuzzy. The love I know, he continued, is not like that.

Love wants to be known.  Love comes knocking on the door confident, insistent but polite and confident.  When I opened the door and found Love on the steps I asked, “How long have you been here?” “Forever,” was Love’s reply.  There’s a kind of security in the way love works Love would rather make a big deal of other people than itself. After a long hike through muddy terrain rather than putting its feet up, love will be cleaning everybody’s boots.

If I choose to do what love would not want me to do love lets me have my way. This is not weakness, Choosing to let others have their way is a strength.  Love calls a spade a spade, it calls out my wrongdoing a bit too much.

Love is not some dreamy romantic.  I see hope in Love, all things are possible, people can change.  Love will not walk out on me. How do I know that? I have nailed him to a tree and he still came back.  Loves death has brought me life. Love comes alongside me even when it costs life itself.

Farewell Steve, you have a deep knowledge of theology which you are able to understand in an understandable way. May God bless your future ministry.