…who trespass against us. 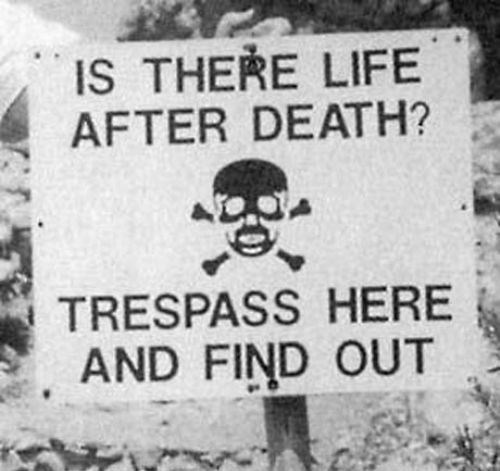 We tend to think of the word trespass as something to do with being on private property without permission. There are a number of No Trespassing signs, which include the one above, and one which adds “Violators will be shot, survivors will be shot again.” It is offered for sale, so someone must be buying it.

But is that what trespass means in the Lords Prayer [1]?

Forgive us our trespasses,
As we forgive those who trespass against us

That is the form used in mist liturgical churches, and others, in the UK, but as following the link in the footnote below will show that this is not the only way to translate what we are asking to be forgiven. Trespasses, sins and debts are all ways of translating ὀφείλημα. A quick Google and a search of concordances shows the word literally meant debt, but was also  used metaphorically, going right back to Aristotle, to mean offence or sin. Luke has ἁμαρτία which means something that is done wrong or mistake

One or all could be what Jesus meant. But enough of the prattling on. Languages are not something I do well. I do logic well, but language is rarely logical.

Forgiveness is at the very heart of the Gospel. it is part of Gods nature to be forgiving. Jesus started his ministry by asking people to repent[2]. To repent is change the direction in what they were doing and what they aimed at. To  repent is the way in to forgiveness.

God wants to forgive you. There is nothing so bad that you cannot be forgiven. Jesus has taken the penalty for all of it.

Jesus told a story about a servant who was not forgiven[3].

Then Peter came up and said to him, “Lord, how often will my brother sin against me, and I forgive him? As many as seven times?”  Jesus said to him, “I do not say to you seven times, but seventy times seven.

“Therefore the kingdom of heaven may be compared to a king who wished to settle accounts with his servants. When he began to settle, one was brought to him who owed him ten thousand talents. And since he could not pay, his master ordered him to be sold, with his wife and children and all that he had, and payment to be made. So the servant fell on his knees, imploring him, ‘Have patience with me, and I will pay you everything.’ And out of pity for him, the master of that servant released him and forgave him the debt. But when that same servant went out, he found one of his fellow servants who owed him a hundred denarii,and seizing him, he began to choke him, saying, ‘Pay what you owe.’ So his fellow servant fell down and pleaded with him, ‘Have patience with me, and I will pay you.’ He refused and went and put him in prison until he should pay the debt. When his fellow servants saw what had taken place, they were greatly distressed, and they went and reported to their master all that had taken place. Then his master summoned him and said to him, ‘You wicked servant! I forgave you all that debt because you pleaded with me. And should not you have had mercy on your fellow servant, as I had mercy on you?’ And in anger his master delivered him to the jailers,[f] until he should pay all his debt. So also my heavenly Father will do to every one of you, if you do not forgive your brother from your heart.”

In it the servant owed millions of pounds, more than the total revenue of a province. Many times what he would be able to pay back in a lifetime. yet the king forgave him. There is no limit to God’s forgiveness, nor to what we can be forgiven. Yet when that servant in the story was unforgiving to someone who owed a tiny amount, the King punished him.

It is God’s nature to forgive. Jesus, when dying on the cross said, “Father forgive them,” He forgave even his killers[4]. Stephen did the same[5]. We have been forgiven a lot and we should pass this forgiveness on.

Forgiveness is so important that it is the only part of the Lord’s prayer that Jesus comments on:

Is this harsh, God not forgiving the unforgiving?

Not at all. Psychologists are saying the same thing[6]. If we hold on to grudges we are hurting ourselves, the person we resent is not hurt by our bitterness. Our sanity depends on us being forgiving. The old saying about revenge being a dish best served cold is not good for our health.

We are made in the image of God. It is God’s nature to forgive, it should be ours as well.

2 thoughts on “As we forgive those…”