What we did on our Church Weekend

I’ve always been into the Blues. So much so that I spell it with a capital B. The Blues is not just a music, not just a feeling: The Blues is more personal than that. One misconception about the Blues is that it is songs about feeling bad, but it is not. The Blues is about lifting people out of their humdrum existence. A song which sums the Blues up for me is Out of bad luck by Magic Sam. These words are repeated during the song:

The Blues came out of slavery, originally based in field hollers, the rhythmic chants slaves worked to whilst picking cotton, and other menial tasks. After emancipation there was no freedom. The Blues is the music of a segregated society told by the people on the wrong side of the divide, the common theme of You’ve gone and left me for another man stands in for the persecution and prejudice that was felt in their lives. It is the song of the oppressed, yet they can shout this to the oppressors:

“When I reach the top this time baby
you gonna wanna be my friend.”

So what has this history of the Blues got to do with Holy Trinity Church’s weekend in Derbyshire? Richard Pennystan gave an example of one of those downbeat complaining Psalms. I cannot remember which one it was, there are many of them, but I am using Psalm 43.

Vindicate me, O God, and defend my cause
against an ungodly people,
from the deceitful and unjust man
deliver me!
For you are the God in whom I take refuge;
why have you rejected me?
Why do I go about mourning
because of the oppression of the enemy?
Send out your light and your truth;
let them lead me;
let them bring me to your holy hill
and to your dwelling!
Then I will go to the altar of God,
to God my exceeding joy,
and I will praise you with the lyre,
O God, my God.
Why are you cast down, O my soul,
and why are you in turmoil within me?
Hope in God; for I shall again praise him,
my salvation and my God. 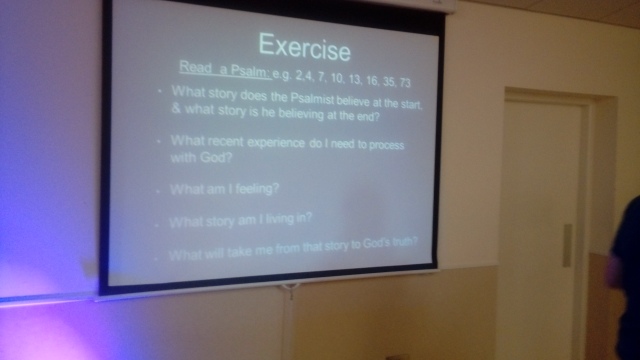 The photo above shows a few of these psalms, choose one and ask yourself these questions:

But back to the Blues, Here’s Magic Sam.

Just an aside, I keep wanting to call Richard Pennystan Richard Penniman, but he is far too tall. Wop bop a loo bop.