A weekend at Church in two parts.

The first, the Men’s breakfast on Saturday, was followed by a time of maintenance on the church building. The breakfast part went well, we heard from Wayne, our Youth Pastor. The working part – I had a look at the list of jobs to be done and realised there was nothing I could help with. After over 12 years since I had the accident, I keep forgetting I can’t do things, a shame because I like the fellowship of working alongside others. In the end, I went away disappointed.

The second was better. The 10.45 Sunday service, although my Aspie mind came into play, finding tangents to go down. In the sermon Vicar Mike was speaking about how people define themselves. Some see themselves as a job, “I am an accountant,” others by the car they drive, or by their clothes size. It was at this point my mind went off on one of its frequent excursions. “That’s harsh, I thought, God does not like Mediums.” Bad-Puns ‘Я’ Us. The upshot was that because my mind was off exploring Planet Autism I missed what was said next in the sermon. I was back in order to work out that the gist was that there is the world’s story or God’s story, which one are you living?

I like to leave these blogs on a question such as the one above, so to leave people thinking rather than direct the way they should go. This week I’ll continue, for in digressing I have not mentioned what the service theme and sermon were actually about. It is that Jesus is coming back, something that is mentioned in the Bible many times more often than the incarnation, Jesus’ first coming, Jesus’ return is in the three main Creeds of the Church and it is in the liturgy. Christ has died, Christ is risen, Christ will come again we say in the Communion service. The return of Jesus is where all the hope of the Church comes from. 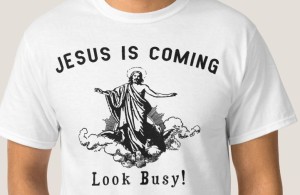 An image of a teeshirt appeared on the Church screens with the message Jesus is coming, look busy. Vicar Mike reminded us that when Jesus returns he will be looking for people who are working for the kingdom of God.

That the sermon ended there brought the service full circle. A couple in the congregation, Sarah and Dan, who are to be married this Saturday, will be going to work in South Africa in an orphanage. They worked there as a temporary measure and have been asked to come back as a more permanent. We commissioned them to that work at the service and the church will support them financially in this ministry.

It is great to be part of a sending church.

One thought on “Transformed: Becoming like Jesus in anticipation”