We are the people of God on the ground 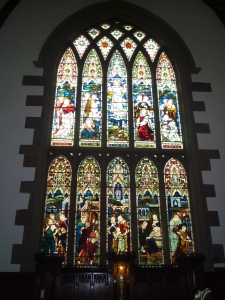 There were fewer people than usual in the congregation today, it is that odd time between the holidays of Christmas and New Year which people do not know what to call, or often what day it is. Not only was the congregation smaller, but it was a combined service at 10am rather than two at 9am and 10.45. I estimated between 60 and 70 were there, not good for a church where the Easter congregation, also a single service, was 180.

The service was led by two retired clergy we have at our church, the stipendiary ministers being away, both having small children I could not imagine they were having a lie in.

I was having a rest too. I had a busy weekend last week and will be playing percussion next week. This was a week to sit back and let the service happen.

The sermon was based on an Old Testament reading, Isaiah 42. Here is my recollection of what was said:

The new year is a time when some people make resolutions. The people Isaiah wrote to were about to enter a new chapter. They were exiles, living in Babylon, God, who had previously used the prophets to tell his people how they were getting things wrong was now preparing his people to return to their land, and also speaking in a poetic form of God’s servant, which was fulfilled in Jesus.

There was a different power dynamic with Jesus and the people he met in his life than we would expect to see from leaders. Jesus understood people because he was amongst them not above them. Jesus’ showed his kingship by not being part of some ruling elite. Jesus ruled by being a servant. A bruised reed cannot be used for making a musical noise it is thrown away. A flickering candle is replaced. That is how things were. Isaiah said that God’s servant, Jesus, would not throw away the bruised people or the used candle because Jesus came to heal and restore. Our mission as the Church is the same, to heal and restore.

Jesus is also about justice: He is against injustice. We are aware that there are injustices in our society. We might not be able to deal with big things, but what about the small injustices in our communities? God equips us for this task by giving us his Spirit. That is the thing that makes the difference, God’s Holy Spirit.

God may be calling us to do extraordinary things in the power of his Spirit.

Here is the passage in question:

Behold my servant, whom I uphold,
my chosen, in whom my soul delights;
I have put my Spirit upon him;
he will bring forth justice to the nations.
He will not cry aloud or lift up his voice,
or make it heard in the street;
a bruised reed he will not break,
and a faintly burning wick he will not quench;
he will faithfully bring forth justice.
He will not grow faint or be discouraged
till he has established justice in the earth;
and the coastlands wait for his law.
Thus says God, the Lord,
who created the heavens and stretched them out,
who spread out the earth and what comes from it,
who gives breath to the people on it
and spirit to those who walk in it:
“I am the Lord; I have called you in righteousness;
I will take you by the hand and keep you;
I will give you as a covenant for the people,
a light for the nations,
to open the eyes that are blind,
to bring out the prisoners from the dungeon,
from the prison those who sit in darkness.
I am the Lord; that is my name;
my glory I give to no other,
nor my praise to carved idols.
Behold, the former things have come to pass,
and new things I now declare;
before they spring forth
I tell you of them.”
Isaiah 42:1-9 ESVUK1