The UCI Road World Championships Came to Yorkshire, with various start points around the county with them all finishing in, as I follow cycling as a sport this was something I had to see. 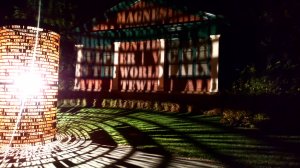 My wife Linda and I travelled to Harrogate, our accommodation was at the home of friends of Linda’s late mother. A meal with them was followed by viewing Valley Gardens at night with their son, who was back for the whole week for the racing. In the Gardens there was an impressive lit sculpture, after this we went to a historic pub.

For the first time, a para-cycling event was taking place alongside the UCI world championships and as all the categories were passing through Knaresborough we were watching from there. Knaresborough had gone to town for the event, with a market and historical vehicle show in the town square and a party in the castle grounds. We had lunch in the castle before watching the cyclists come down the main street.

I found the adaptions of the cycles to cope with the different levels of disability quite amazing. It is great how technology can enable people. Great Britain won 7 of the 12 categories of racing.

That evening we had a meal at Wagyu Bar and Grill, out of our usual price range, but very good.

Our hosts were out early because Ewart was preaching, so we helped ourselves to a light breakfast and went to church at Mowbray Community Church. After that, we had plenty of time to pick up a sandwich and find a place to watch the race, which was at the bottom of Valley Gardens, as there we could see the Team Time Trial Mixed Relay, a race for a team of three men and three women, where the men go first, then after their lap of the circuit the women take their turn.

On a wet circuit, the speed was down on that expected. I was pleased to see the Great Britain Team take the Bronze medal, behind the Netherlands and Germany. We were helped by a slow bike change due to a puncture in the Italian team. I thought the GB women were particularly good (after the Netherlands) as the men were in 6th position after their leg.

We were back in Huddersfield and I was back on my task of looking after my granddaughter, Brook. Because of the toddler group, Little Lights, she attends I missed the morning Women’s Junior Individual Time Trial, and another GB bronze, this time behind a Russian Gold, but managed to watch the latter part of the men’s junior race. Technical problems for Italy for the second day running. Tiberi broke a crank on the start slope then got delayed by a team car of a rider he had caught. He went on to win the gold medal and rainbow jersey. A remarkable ride.

I was happy to be watching this on TV from home. The Yorkshire weather being spectacularly autumnal. The roads were flooded, especially near the start city of Ripon. The worst of the weather was after the first event, the Men’s U23 Individual time trial, had started. A mini-rant here: Why is there no corresponding under 23 category for women. The road to equality has still some way to go.

The weather meant some spectacular falls, a Danish rider fell into a large pool of water whilst a Hungarian slid at speed into a kerb yet managed to continue, how he was able to do so after such an accident baffled me and the TV commentary team. The winner was from Denmark

The second race of the day was delayed. The Fire Brigade were out on the course pumping water off the road. The Women’s Elite Individual Time Trial started late. As I had promised to meet my wife when she finished work, it was her birthday, I missed the end of the race, the second women’s category event I missed. What I did see showed less surface water on the roads, but it was still very wet. The final result was a win for USA, upsetting the promised Netherlands victory.

The day of the Men’s Elite Individual Time Trial. The weather had eased, so the weather had less of a bearing on the results than the previous day. A win for Australia. More important to me was news that the practice session for our church musicians for Sunday had been moved to 3:00pm, around the time the Women’s Elite Road Race was due to finish. As we have a new worship leader, and this would be her first service leading I had a difficult decision to make. Should I still go to Harrogate to watch the race end or attend the rehearsal?

I am still watching from home. The time trials are now over, so it’s a switch from the individual effort that is the Time trial to the team tactics of road racing. Tactics were very much to the fore on the Men’s Junior Road Race, the only competition of the day, with two riders from the USA in the leading bunch. Magnus Sheffield doing much of the work on the front of the bunch led to the victory of the other USA rider Quinn Simmons.

Two races today. First was the Women’s Junior Road race, which saw another victory for the USA in Junior road racing on what was a flat course until near the end. The USA is a team to watch in the future.

Drama at the end of the Men’s U23 Road race, the first rider over the line is disqualified for drafting behind his Netherlands team car. The winner is from Italy and the disqualification gives Great Britain a Bronze. 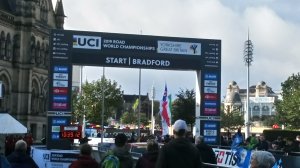 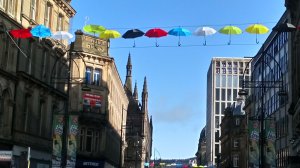 rain stopped almost immediately I got to Bradford to watch the start. Autumn weather is predictable only for being changeable, and this week’s weather was no exception from the heat and bright sunshine of the first Saturday to the torrential downpours of Tuesday.

I watched some of the riders of the Women’s Elite Road Race being introduced, then as I needed to sit went to Starbucks for a coffee and muffin only to meet a Viking invasion: Norwegian fans, complete with plaited beards. (I am tempted to say, ‘and that was just the women’ here, but that would not be true.)

Returning home I was able to see much of the race, including the decisive attack on the most severe climb of the day, but I had come to my decision and went to the church music practice, missing the finish, which was Gold and Silver to the Netherlands.

The day of the final event, the day of the Men’s Elite Road Race. Weather conditions overnight had been severe and it was announced on the radio that the race coarse had been shortened to miss out the climb of Buttertubs pass. The prospect of thousands of fans in such an exposed place in such bad weather was something the police and the mountain rescue service wished to avoid. I was worried that because of the shortening of the course I would not see the end of the race, but I knew that if I did not at least try I would be kicking myself for a long time.

I watched the start on TV, went to church and left immediately after the service for a train to Harrogate, buying a pasty at Leeds Station on the way. I should not have worried, the race was already on the Harrogate circuit, but there were many laps remaining. I found my way to the same place I had been on the previous Sunday with views of the course in two places and an elevated position so that I could watch while seated.

As the race continued the leading group grew to five riders, then on the last two laps shrink to four and then three. There was a nearby loudspeaker giving a running commentary on the race. By pure coincidence, the Vikings from the day before were on the opposite side of the road. When the race got down to two laps to go the number of fans braving the rain went up dramatically as people watching on pub televisions came out to add to the atmosphere of the occasion and to see or hear a Dane win. I am glad I went.

As I was on the inside of the course getting from the viewing point back to the station was a bit of a challenge. But the feel of the crowd was positive, even the Vikings.

In conclusion whose sporting performance was I most impressed by? Going by results it should be the Netherlands duo, Annemiek van Vleuten, Winner of the Women’s Elite Road Race and Bronze in the Time Trial, or Anna van der Breggen, silver in both the time trial and road race. But no, my most impressive cyclist goes to a young rider who worked his socks out for a teammate, knowing that he created a win for his country but will not have his name in the history books. Cycling is a strange sport, it’s a team sport where the individual gets the glory. Today I am giving my glory, for what it’s worth, goes to a domestique exrordinaire, the man who did most of the work to bring victory to someone else and still had the energy left at the end to win the group sprint. USA rider in the Men’s Junior Road Race, Magnus Sheffield. If he’s not in a major team, he should be.

One last point, there should be the same number of medals available for the women as for the men. UCI, make it so.