The authority of Jesus

As they were going away, behold, a demon-oppressed man who was mute was brought to him. And when the demon had been cast out, the mute man spoke. And the crowds marvelled, saying, “Never was anything like this seen in Israel.” But the Pharisees said, “He casts out demons by the prince of demons.” — Matthew 9:32–34 ESVUK 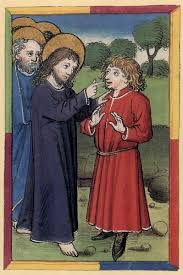 Matthew’s Gospel is talking about being freed from demons again. I contribute to discussions on a Christian website where other contributers say that there are no demons, and that it is all psychological. Others take the view that they did and do exist, but generally, that view is given a hard time on the forums. I’m in the other camp. I take the Bible literally when it says there are demons because my experience is that demons leave oppressed/possessed people when commanded in the name and authority of Jesus.

I was in Christian rock bands, Fathom and later In Full Colour, in the late 1970s and early ’80s. After one of Fathom’s concerts in the south of Bradford less than ten miles from here, some people who had been in a meeting in Mirfield where I was leading worship recognised me and asked me to speak to their friend who they had brought with them. The friend had been told the Gospel but was unable to respond.

A small group of us went with this friend into the church building from the room of the concert. Questions were asked, demon activity was discerned and a prayer was made in Jesus’ name severing his ties with evil. Without prompting the man who was unable to respond to the Gospel spontaneously accepted Jesus Christ and started praising God. The name of Jesus is effective. The authority of Jesus is powerful.

In the passage, Jesus cures a man who could not speak because of demons. That does not mean that all muteness is caused by demons, just that this one was.

I am autistic. Autism in me has sensory issues and social issues, which is why I write a blog rather than vlog or speak publicly. Some autistic people are unable to speak at all or go mute under stress and burnout. Please do not mistake neurodiversity with demon possession.

This freeing from demons by Jesus is one of the signs that Jesus was the Messiah, which I went into details on in the previous blog. The Messiah came to free people, a sign if that the mute speak. This passage also provides links to the next parts of Matthews Gospel.

But that is for another time, possibly in Lent 2020, but my Advent blogs are now finished.

(Edit to add, 9th February 2020, That will happen, Lent blogs are in preparation now)

Have a blessed Christmas.

One thought on “Speak out”